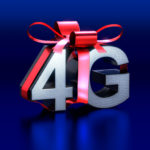 We see the number/letter combination in the corner of our smartphones so often, it has almost become invisible: 4G/LTE. Not only that, ‘4G’ is also touted so repeatedly (and loudly) in Verizon, Sprint, and AT&T commercials, most of us hit the mute button without even realizing it anymore. We know 4G/LTE has something to do with cellular networks and speeds, but what is 4G/LTE really? And, what does it mean for our daily lives in which smartphones and connectivity have become such a necessity for work, life, and play? Let’s start by defining 4G/LTE:

4G/LTE is really two terms in one. 4G is a collection of fourth-generation mobile data technology. Not surprisingly, it succeeds 3G and is also called IMT-Advanced (International Mobile Telecommunications Advanced). All 4G standards must conform to a set of specifications created by the International Telecommunications Union. LTE stands for Long Term Evolution, which is not really a technology, but a standard for wireless communication. (Source: TechTerms).

How fast is 4G? 4G technologies are required to provide peak data transfer rates of at least 100 Mbps (megabytes per/second). This includes the connection rate for mobile phones, smart phone tablets, etc. However, keep in mind that actual download speeds vary based on location, signal strength, and interference. As an example, just because a device has the capacity to reach 4G, it doesn’t mean you’ll automatically hit those connection speeds (for instance, you’ll have the best chance if you’re in a city, as opposed to a remote location, assuming wireless interference isn’t too severe).

Are you really getting 4G speeds? The short answer is: no, not really. When the governing body set the minimum speeds for 4G mobile devices, around 2008, they decided that because 4G was not actually attainable in the practical sense for network providers, they would introduce the term LTE. LTE basically means the authentic pursuit of the 4G standard, and it offers a considerable improvement over 3G technology.

As a result, most network providers today offer 4G LTE network speeds which they brand as next-generation connectivity performance, even though they are actually hitting pure 4G speeds.

Does 4G matter anyway? The answer to this really lies in how these connection speeds impact the user experience. How fast can your devices load pages, download music or video conference in real life situations? As a rule, while 4G/LTE seems to be a considerable improvement over 3G speeds when comparing 4G/LTE and “true 4G” networks of today, most upload and download speeds are almost identical.

4G and the enterprise  If your company is considering 4G/LTE wireless internet to provide remote access to enterprise applications like CRM and collaboration tools, consider how connection speeds impact performance. For instance, simplified and fast access to applications like Salesforce.com, Cisco WebEx Social, and other business apps, will ensure the applications are used. Many believe the improved speed of access to applications, and the ability to work from anywhere and at any time, are real business benefits. When comparing 4G/LTE mobile data plans for the business, also consider factors like bandwidth requirements and data overage charges.

What’s next? You won’t be surprised to hear that several carriers are already looking ahead to 5G mobile broadband. Experts predict that 2017 will see more trials of 5G technology as the wireless industry continues to define what the 5G technology looks like. AT&T has already announced they are conducting 5G trials with Intel this year. The new 5G wireless modem will work at both super-high radio frequencies and lower-band airwaves. Many believe that early 5G network adoption will come from the enterprise side, in the form of from drones, self-driving cars, industrial applications, and some broadband service to homes and businesses. (Source: Investor’s Business Daily).